human anatomy
myhumananatomy
PERICARDIUM AND HEART
Pericardium
It is a fibroserous sac present around heart and great vessels. It is located in middle mediastinum. Parts of pericardium are 1) fibrous pericardium and 2) serous pericardium 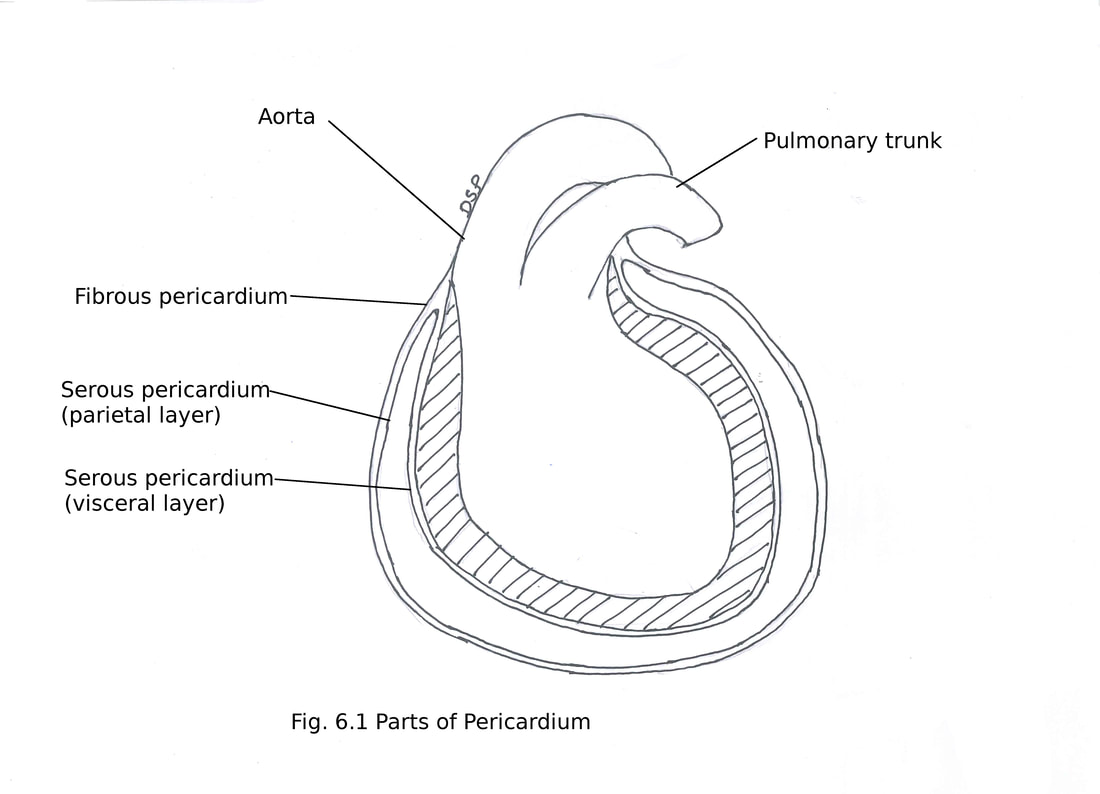 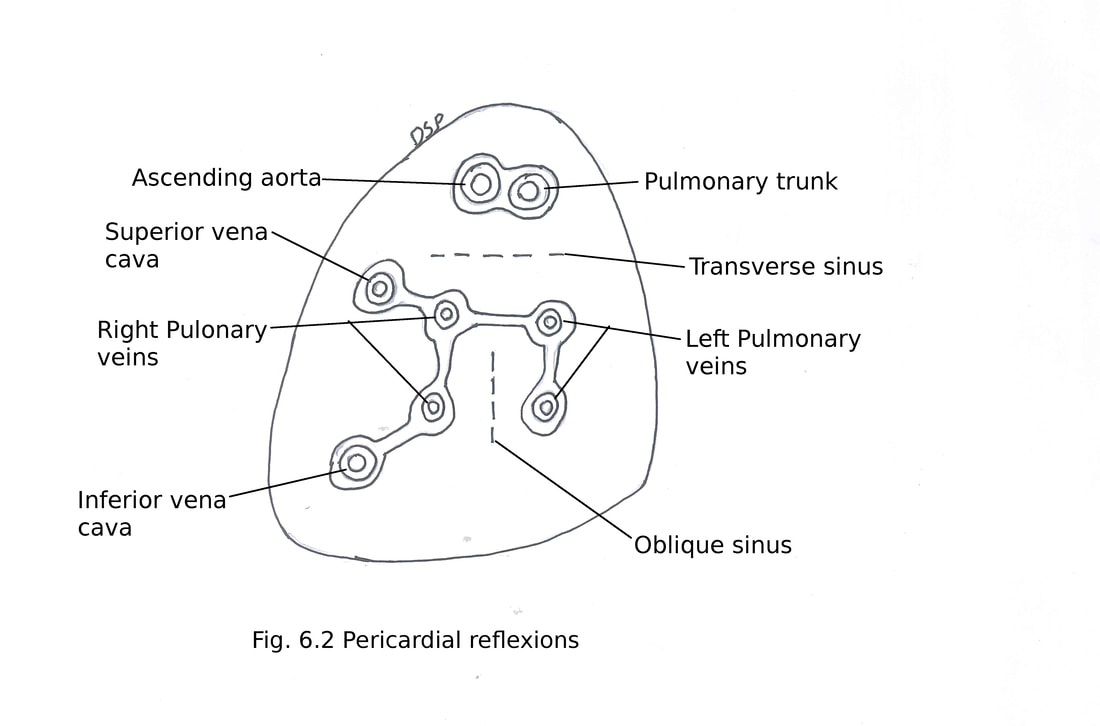 Sinuses of pericardium
Transverse sinus : It is a horizontal gap between two arterial and venous ends of serous pericardium and covered by visceral layer.
Boundaries : Anteriorly shows ascending aorta and pulmonary trunk, posteriorly shows superior vena cava and left atrium.
Oblique sinus : It is a small gap behind the left atrium. It is open below. It is in between parietal and visceral layers.
Boundaries : Anteriorly shows left atrium, posteriorly parietal pericardium, on right side shows two right pulmonary veins with inferior vena cava and on left side shows left two pulmonary veins.
Fold of left vena cava (Fold of Marshall) : It is a fold of serous pericardium from left pulmonary artery to the upper left pulmonary vein. It is formed by a fibrous ligament which is a remnant
of the obliterated left common cardinal vein (left duct of Cuvier). It is continuous above with terminal part of left superior intercostal vein and below continue as oblique vein of left atrium.
Arterial Supply : It receives blood supply from branches of internal thoracic artery, musculophrenic and descending thoracic aorta.
Venous drainage : It drains into azygos veins.
Nerve supply : Visceral layer receives nerve supply from vagus nerve and sympathetic nerves (insensitive to pain), fibrous and parietal layer from phrenic nerves (sensitive to pain).

Applied Anatomy :
1) Pericardial effusion : It is collection of fluid in the pericardial cavity.
2) Aspiration of fluid can be done by a needle puncturing 4th or 5th intercostal space close to lateral margin of sternum or angle between xiphoid process and left costal margin needle directed upwards backwards.
3) Cardiac tamponade : Fluid accumulation in pericardial sac decreases diastolic capacity of heart because of pressure of fluid so it decreases decreased cardiac output known as cardiac tamponade.
HEART
The heart is a hollow muscular organ present in the middle mediastinum. It is conical in shape. It is covered by pericardium. It shows four chambers right and left atria and right and left ventricles.
External Features
It is 12 cm from base to apex and 8 cm in transverse diameter and weighs about 300 g in males and 250 g in females. Atria present above and behind the ventricles. They shows grooves which separates atria from ventricles by an atrioventricular groove, atria are separated by an inter-atrial groove and between ventricles shows interventricular groove 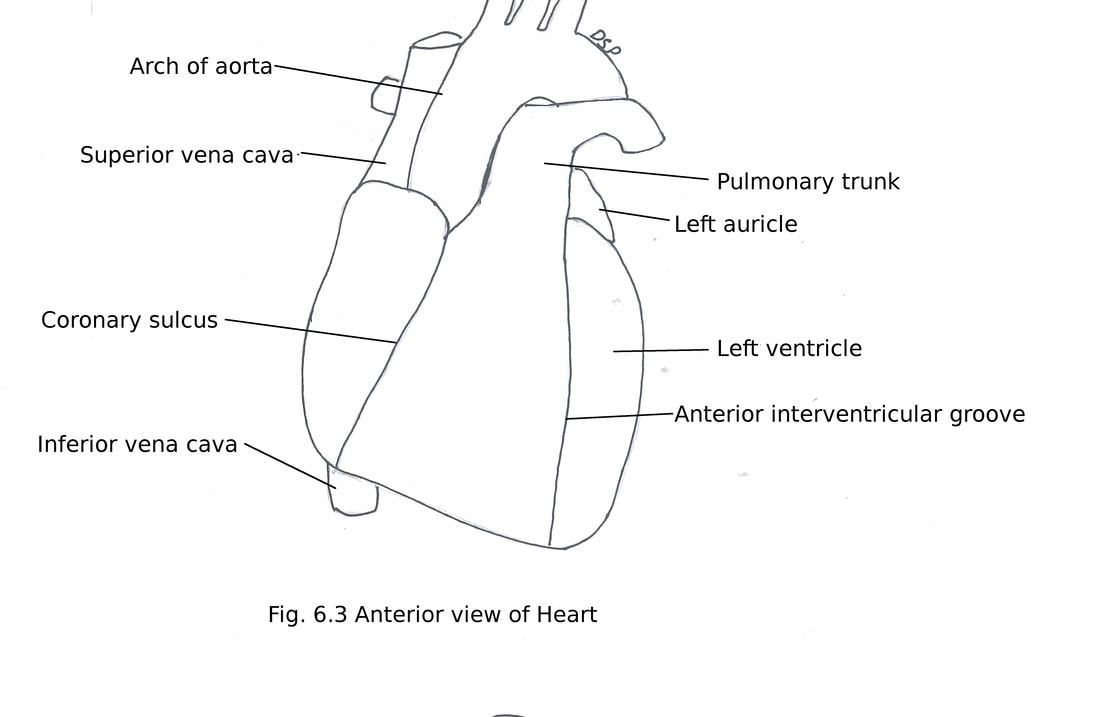 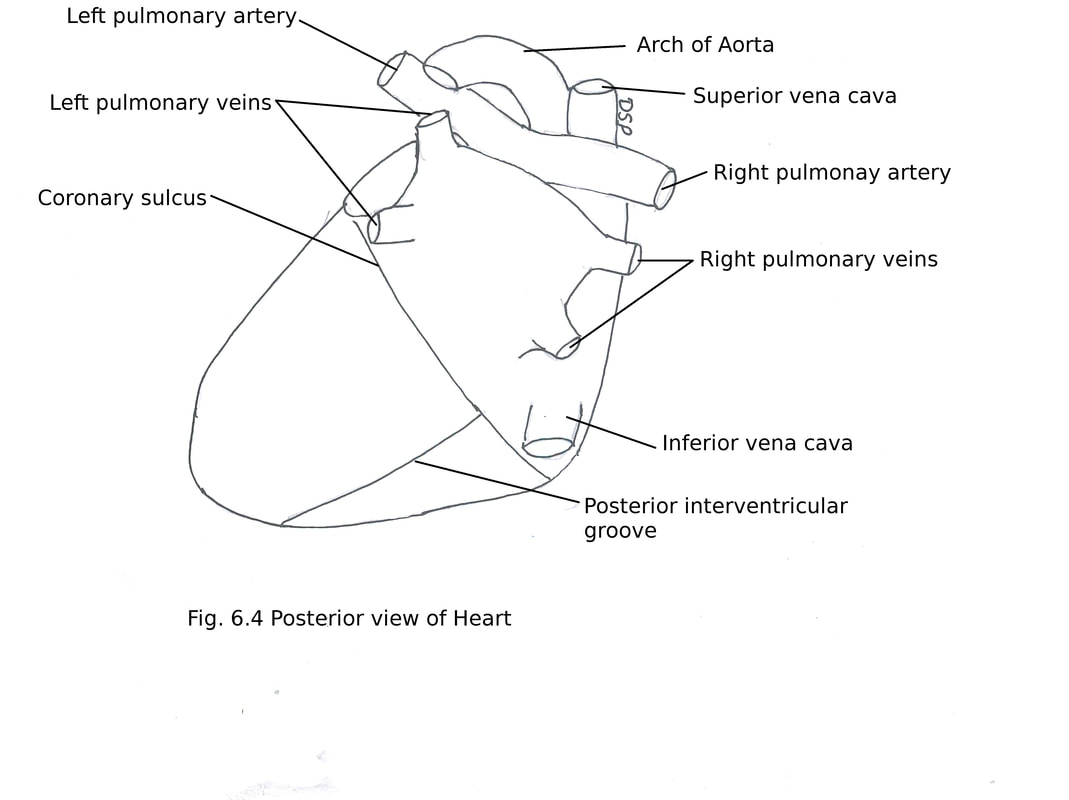 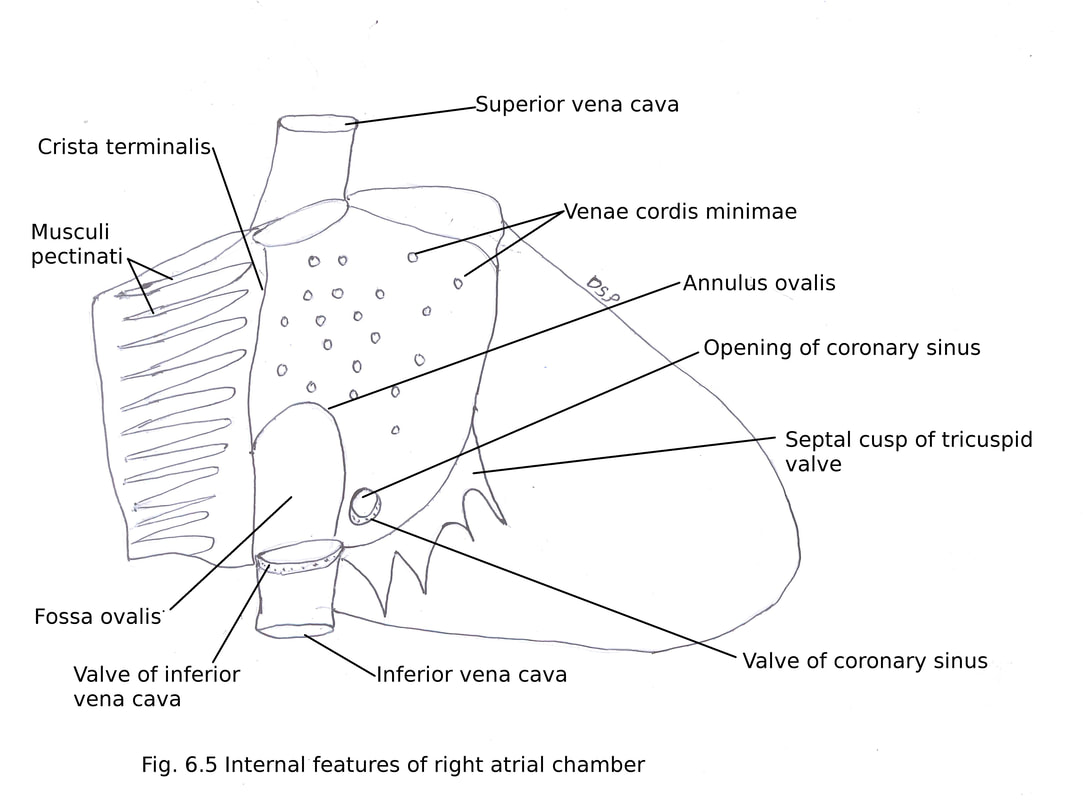 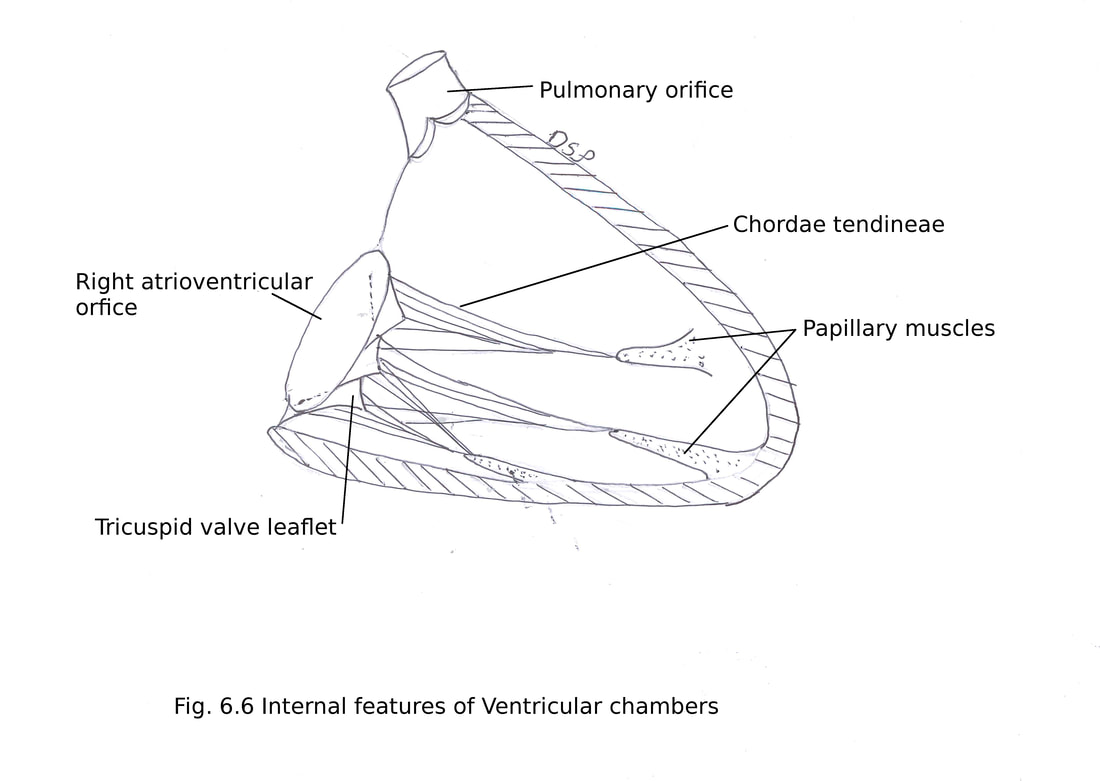 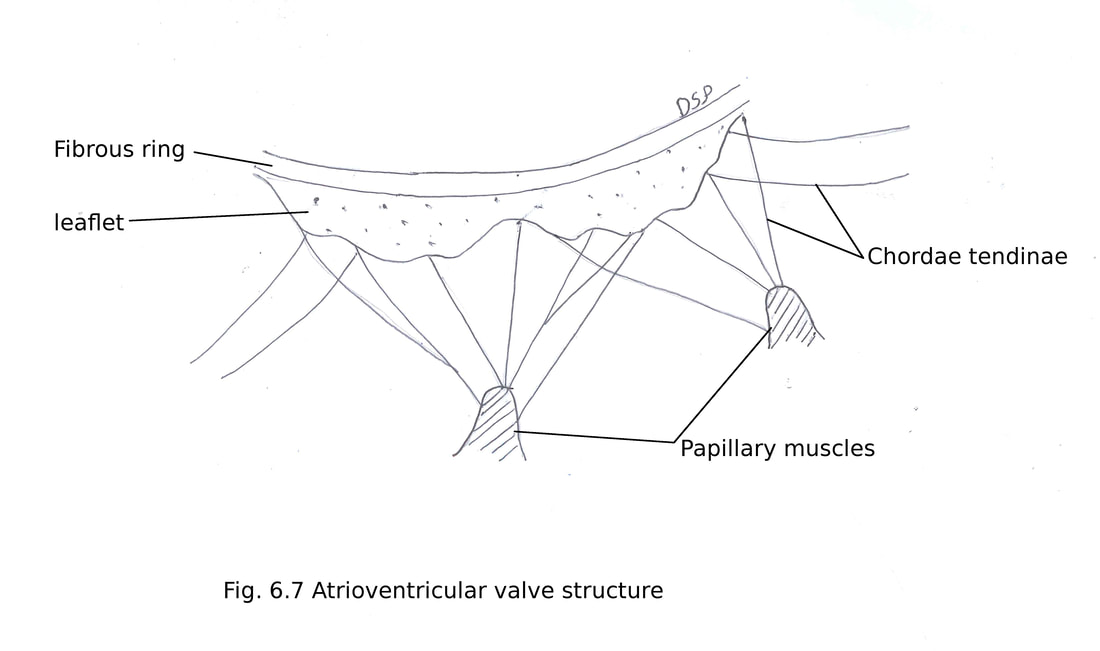 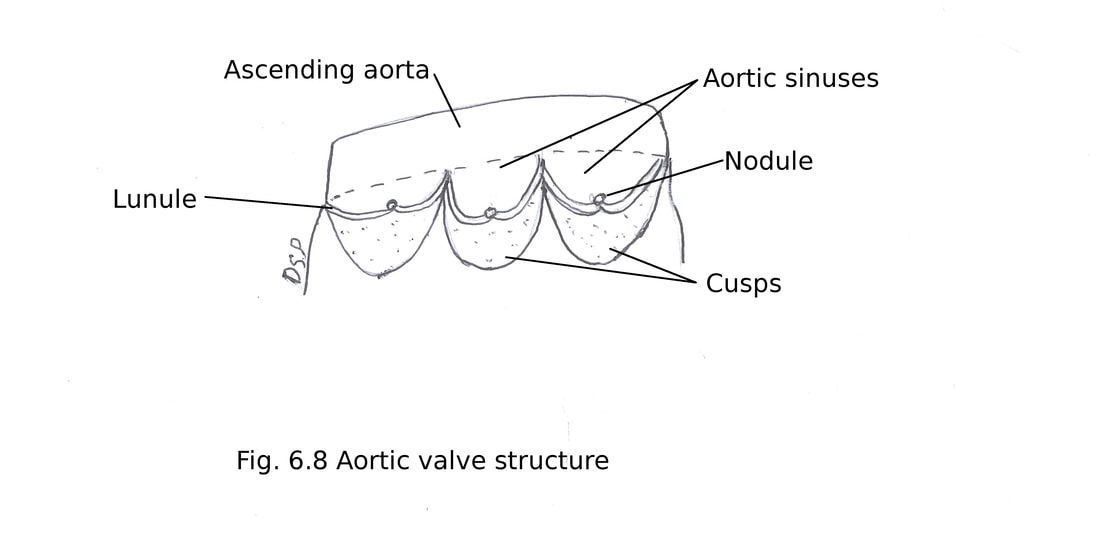 The left atrium
It is a cuboidal chamber present posterior to right atrium. Anterosuperiorly shows a conical projection left auricle. It forms ⅔ part of base of heart. It shows four opening of pulmonary veins which receives oxygenated blood from lungs. It is communicated with left ventricle through the left atrioventricular (bicuspid or mitral) orifice guarded by bicuspid or mitral valve. Interior of left atrium is smooth. Some musculi pectinati is present inside. Some minimal cardiac veins opens directly in cavity from myocardium. Septal wall shows fossa lunata bounded by crescentic ridge concave upwards corresponds to fossa ovalis of right atrium.

Left ventricle
The left ventricle is conical in shape. Its wall is three times thicker as compared to right ventricle. It shows three surfaces sternocostal or anterior, diaphragmatic or inferior and left. It forms the apex of the heart, ⅓ part of the sternocostal surface, left border, left surface and the left 2/3 of the diaphragmatic surface. Interior of left ventricle shows inflow tract and outflow tract.
Inflow tract consists of left atrioventricular orifice guarded by bicuspid mitral valve and trabeculae carneae. Mitral valve also known as bicuspid valve shows two leaflets anterior and posterior. It conducts blood from the left atrium to left ventricle. There are two papillary muscles anterolateral and posteromedial. Chordae tendineae from both muscles shows attachment on cusps of the mitral valve.
The outflow tract leads to aortic opening. Which carry blood from left ventricle to ascending aorta. It is guarded by three semilunar cusps one in front and two behind. Margins of cusps shows a fibrous nodule at the center of free margin and two thin lunulae at other side. Cusp is formed by fold of endocardium. Above each cusp ascending aorta shows a dilatation known as aortic sinus of valsalva. Anterior aortic sinus shows origin of right coronary artery and the left posterior aortic sinus shows origin of left coronary artery. 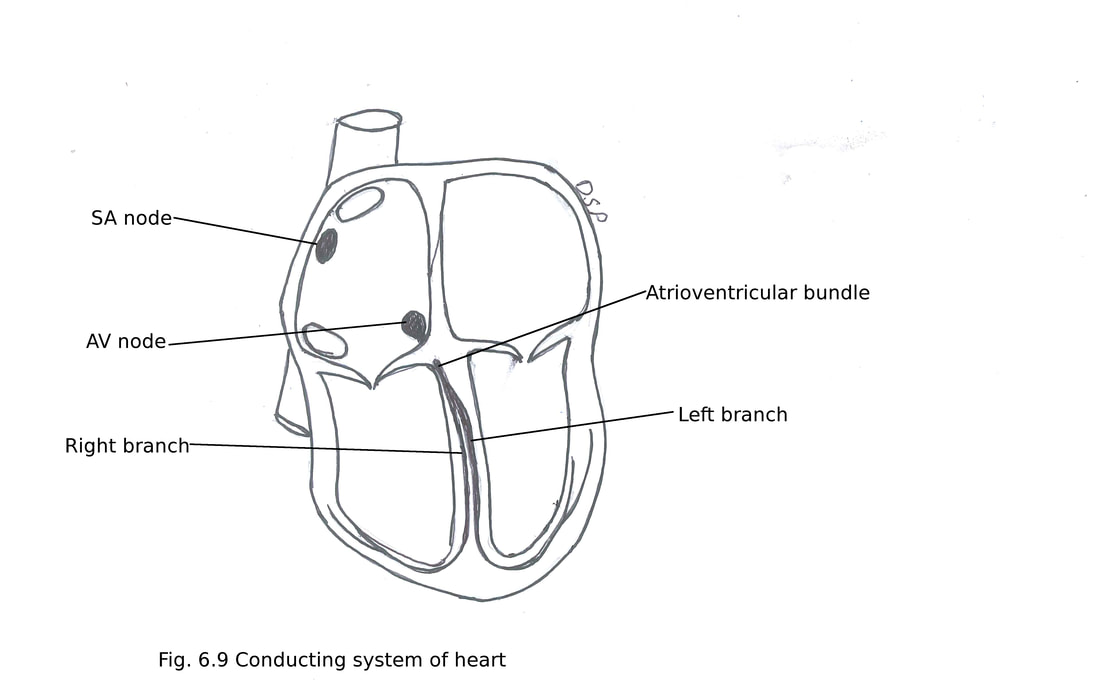 Conducting system of heart
It shows specialized myocytes which can initiate and conduct impulse. It shows following parts : 1. Sinuatrial node (S. A. node), 2. Atrioventricular node (A. V. node), 3. Atrioventricular bundle (A. V. bundle or bundle of His) its two limb branches, 5. Right branch, 6. Left branch and 7. Purkinje fibres. The cardiac impulse begins at the S. A. node stimulates atrial musculature then reaches to A. V. node then it passes through A. V. bundle and through right and left limbs and purkinje fibres goes to ventricular wall.
1. Sinuatrial node (S. A. node) : It is elliptical structure. “P” (pacemaker cells) cells are prominent in this. It lies at a groove between right auricle and right side of superior vena the cava at upper part sulcus terminalis. It initiate cardiac impulse. To maintain heart rate at 70 per minute. It is also known as pacemaker.
2. Atrioventricular node (A. V. node) : It lies at right side of atrial septum above opening of coronary sinus. It is situated in triangle of Koch (bounded above by tendon of Todaro, below by the opening of coronary sinus and in front by base of the septal leaflet of tricuspid valve). It can generate impulse at 60 per minute.
3. Atrioventricular bundle (A. V. bundle or bundle of His) :
It arises from AV node. It traverses central fibrous body. It goes downwards after crossing AV ring reaches on dorsal margin of membranous part of ventricular septum. Here it divides into two branches right and left.
5. Right branch : It is goes on right side of interventricular septum. Then it breaks into purkinje fibres which supply wall of the right ventricle.
6. Left branch : It goes on left side of interventricular septum. After forming one to three fascicles breaks into purkinje fibres which supply wall of left ventricle.
7. Purkinje fibres : These are subendocardial plexus of myocytes. Purkinje myocytes are large and pale. Cardiac impulse spread from endocardial to epicardial surfaces of ventricle. 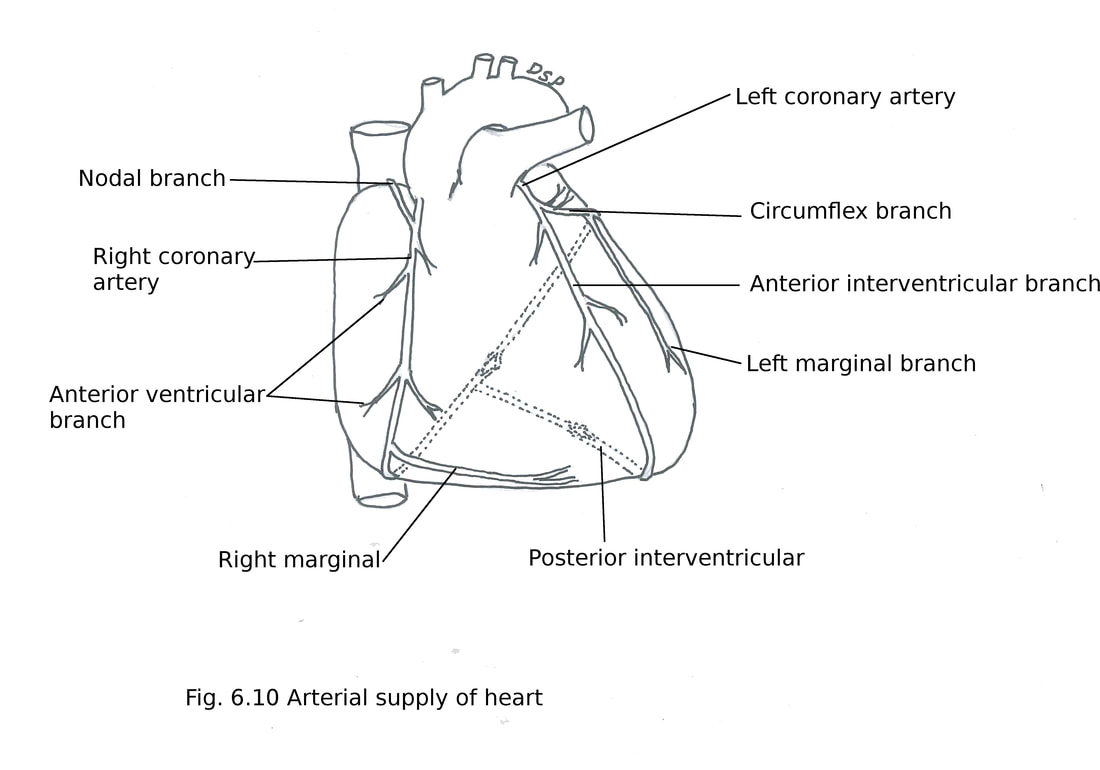 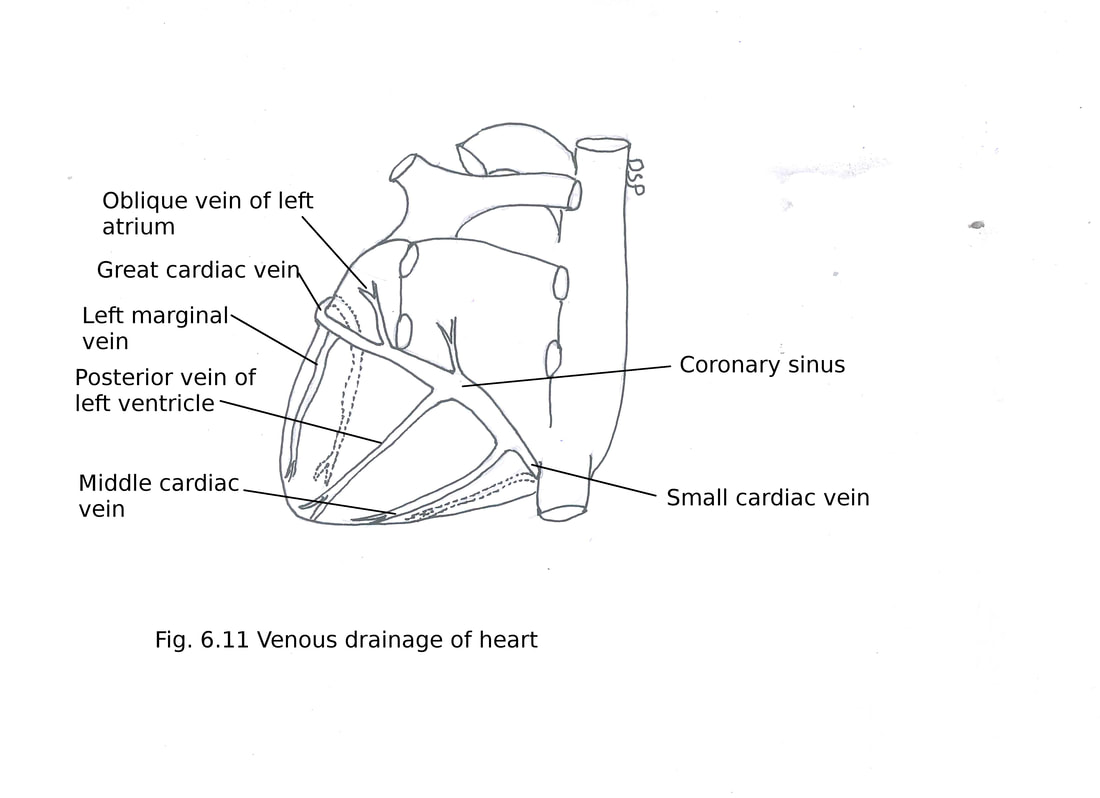 Nerve supply of the heart
Heart is supplied by parasympathetic and sympathetic nerves. Both of these fibres are derived from cardiac plexus. Parasympathetic nerves are vagus. It decreases heart rate and constricts coronary arteries. Sympathetic nerves are derived from the upper 3 to 5 thoracic segments
of the spinal cord. It increases heart rate and dilates coronary arteries.
Parasympathetic and sympathetic nerves fibres form cardiac plexuses.
The superficial cardiac plexus :
It lies below arch of the aorta and anterior to right pulmonary artery. It is formed by the left superior cervical sympathetic ganglion its cardiac branch and lower two cervical cardiac branches of the left vagus nerve. It gives branches to the deep cardiac plexus, right coronary plexus and to left anterior pulmonary plexus.
The deep cardiac plexus:
It lies in front of bifurcation of the trachea, posterior to arch of the aorta and just above division of pulmonary trunk. It is formed by cardiac branches derived from superior, middle and inferior cervical ganglia and upper thoracic ganglia of the sympathetic chain. It also receive branches from vagus and recurrent laryngeal nerves. Only branches which go towards superficial plexus don't join here. On respective right and left side it gives branches to the corresponding coronary
and pulmonary plexuses. It gives small branches to right and left atria.

Applied anatomy :
1. Tachycardia : Increase in heart rate.
2. Bradycardia : Decrease in heart rate.
3. Fibrillation : Irregular, rapid twitching movement of muscles of heart. It may be atrial fibrillation or ventricular fibrillation.
4. Angina pectoris : This is pain in retrosternal region which radiate to inner side of left arm.
5. Myocardial infarction : Death of myocardial tissues due to sudden sudden and complete obstruction of any branch of coronary artery.
6. IHD Ischaemic heart disease : Tthis may due slow obstruction of any branch of coronary artery. This is due to formation of plaque in wall of coronary artery.
7. Congestive cardiac failure (CCF) : Failure of chamber of heart to pump blood efficiently. Causing increased venous return, edema feet, breathlessness. Right sides or left sided failure may be there.