It is anterior part of the chest cavity. Superficial fascia of the pectoral region is fibrofatty it contains mainly breast or mammary gland. The deep fascia of pectoral region also known as pectoral fascia it shows attachment on clavicle, sternum. It enclose pectoralis major muscle and also covers deltoid muscle. It also forms axillary fascia in axillary region and then it split to enclose latissimus dorsi muscle. 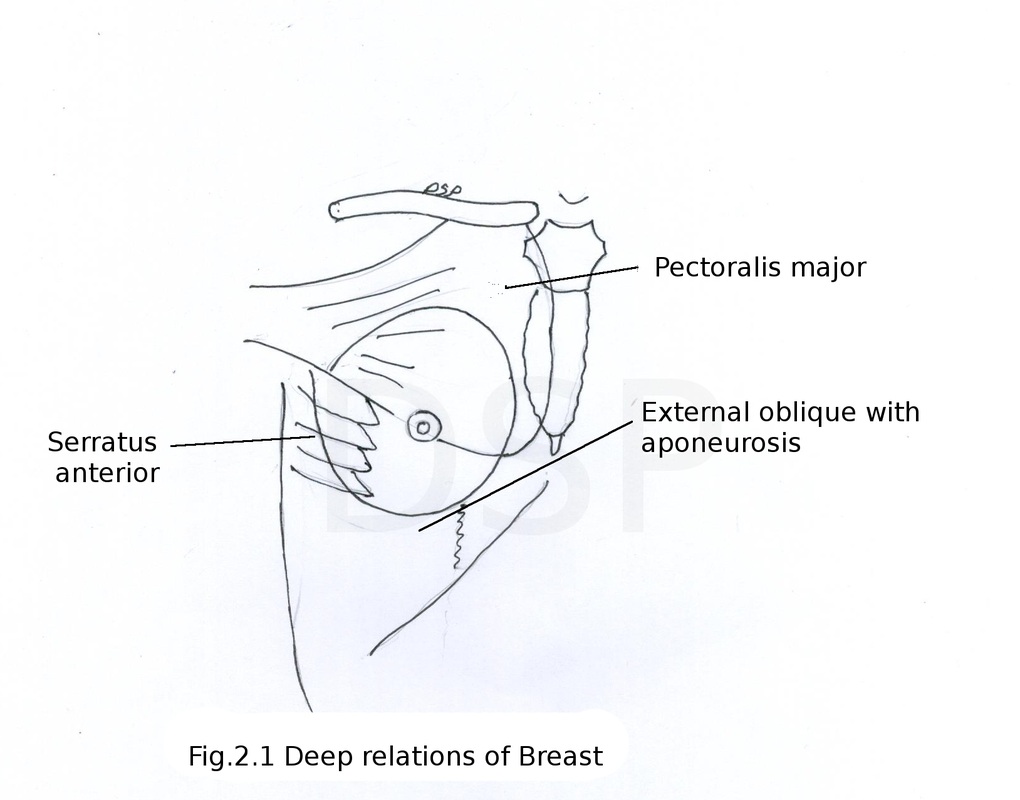 Breast present on both side of pectoral region in male or female but in male it remains rudimentary. In female after puberty these becomes well developed and during pregnancy and lactation it increases in size. Brest lies in superficial fascia of pectoral region and it is a modified sweat gland. Extent circular base of the breast extends from 2nd to 6th rib in mid clavicular line horizontally from lateral border of sternum to mid axillary line of 4th rib.
Deep structures part of the muscles lied deep to mammary gland serratus anterior, external oblique and pectoralis major.
There is a space in between mammary gland and deep fascia covering pectoralis major muscle so that breast can move over deep fascia covering pectoralis major. A part of breast extends into axilla called axillary tail of spence.
Structure of the breast
Skin of the breast shows nipple and areola. Nipple is the conical projection just below the centre of breast at the level of 4th intercostal space it contains 15 to 20 lactiferous ducts also circular and longitudinal smooth muscle fibres these muscle fibres elevate and depresses nipple respectively. It has rich nerve supply.
Areola it is circular dark pigmented area around nipple. It contains modified sebaceous glands these glands enlarge during pregnancy and lactation forming tubercles of montgomery. Skin of areola do not contains hair and fat.
Remaining part of breast formed by fatty tissue, fibrous tissue and glandular tissue. Fatty tissue forms main part of the mammary glands except areola and nipple. Fibrous tissue divide breast into different lobes by forming septa within substance of mammary gland it connects skin of breast and pectoral fascia known as suspensory ligament of cooper. Glandular tissue of breast form by tubuloalveolar type of glands. These glands are present in 15 to 20 lobes of breast draining in to lactiferous ducts. These ducts converge towards the nipple it shows a small dilatation called lactiferous sinus. This ducts finally open on to nipple. 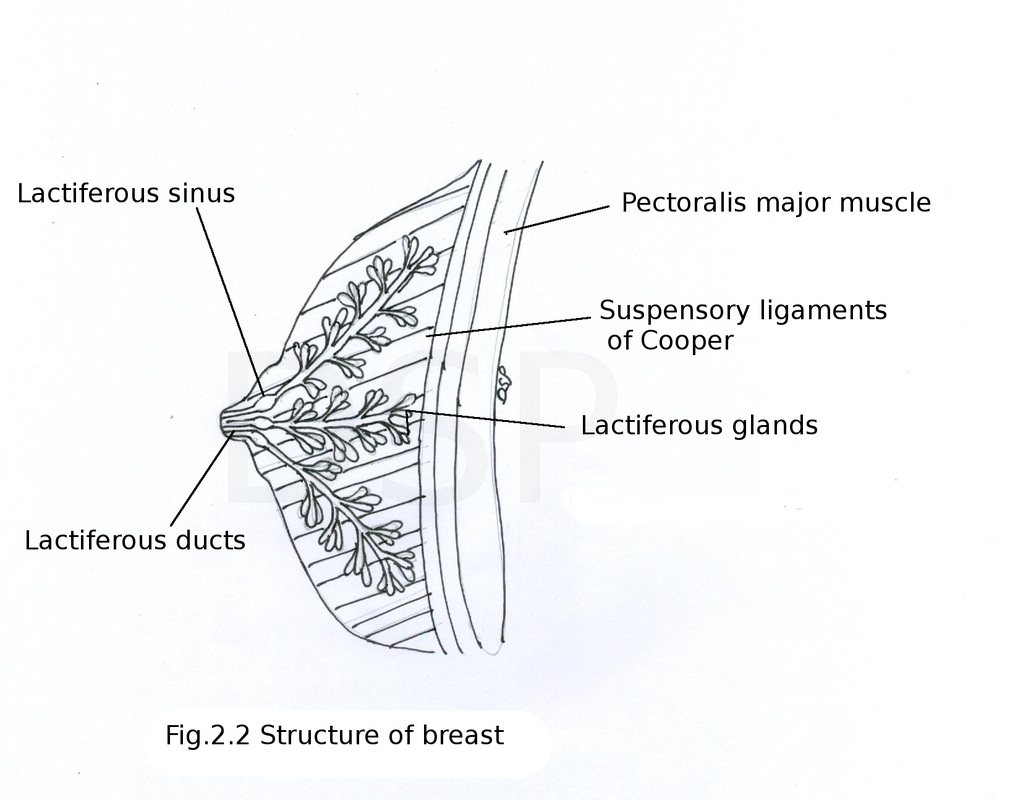 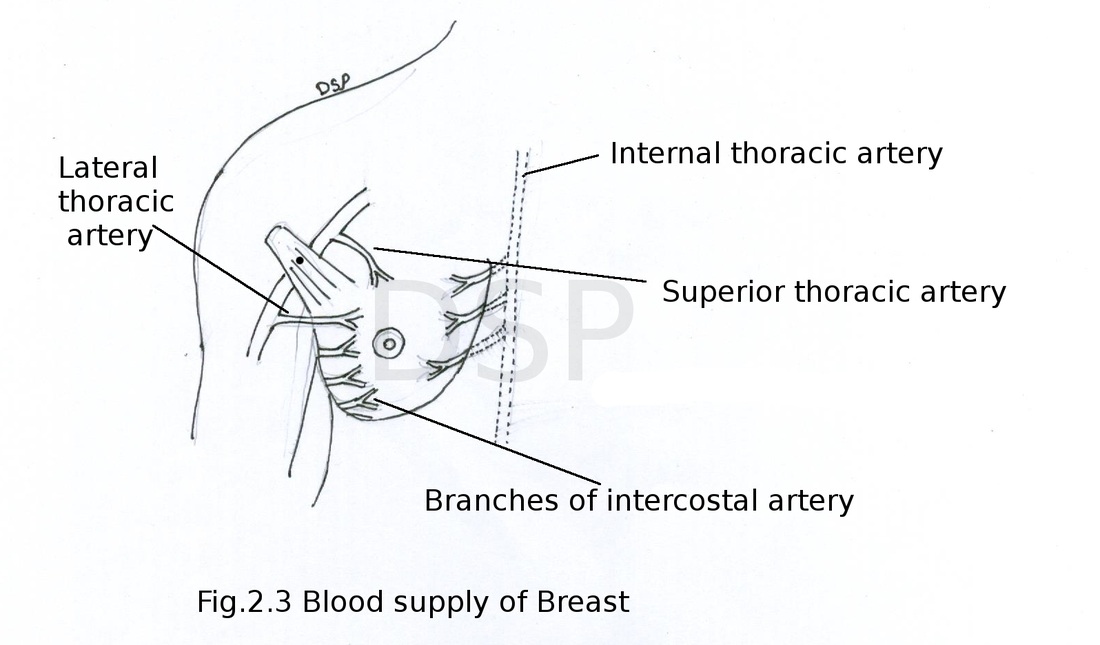 Nerves are coming from anterior and lateral cutaneous branches of 4th to 6th intercostal nerves. These carry sensory fibres to the skin and autonomic fibres which are vasomotor to muscles and blood vessels. 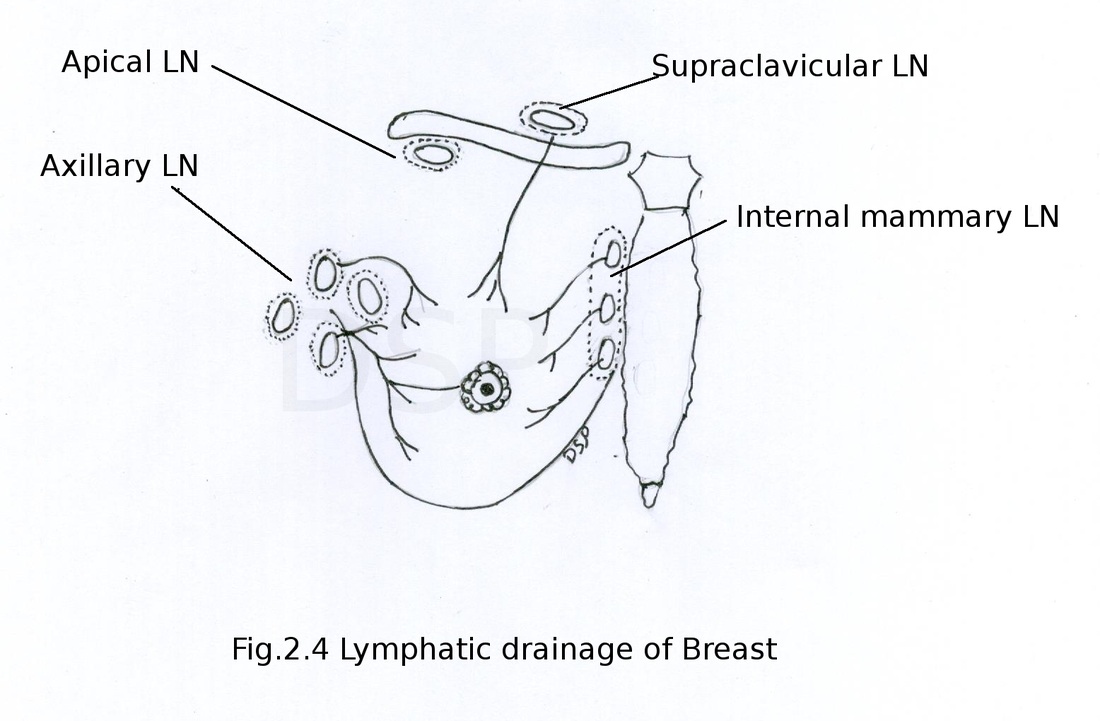 Carcinoma of breast is common in females. Retraction of nipple will take place due to fibrosis of lactiferous duct in carcinoma. Peau d'orange appearance: obstruction of superficial lymphatics of breast causes retraction of hair follicle and oedema of skin hair follicles and breast looks like orange skin. In surgical incision of breast incision should be radial to save lactiferous ducts. Because of communication of lymphatic vessels carcinoma of breast can spread to other side breast or in abdomen to liver or pelvis. With draining vessels (veins) of breast cancer cells can go to vertebral venous plexus and from here to brain. Developmental defects or congenital anomalies also present. 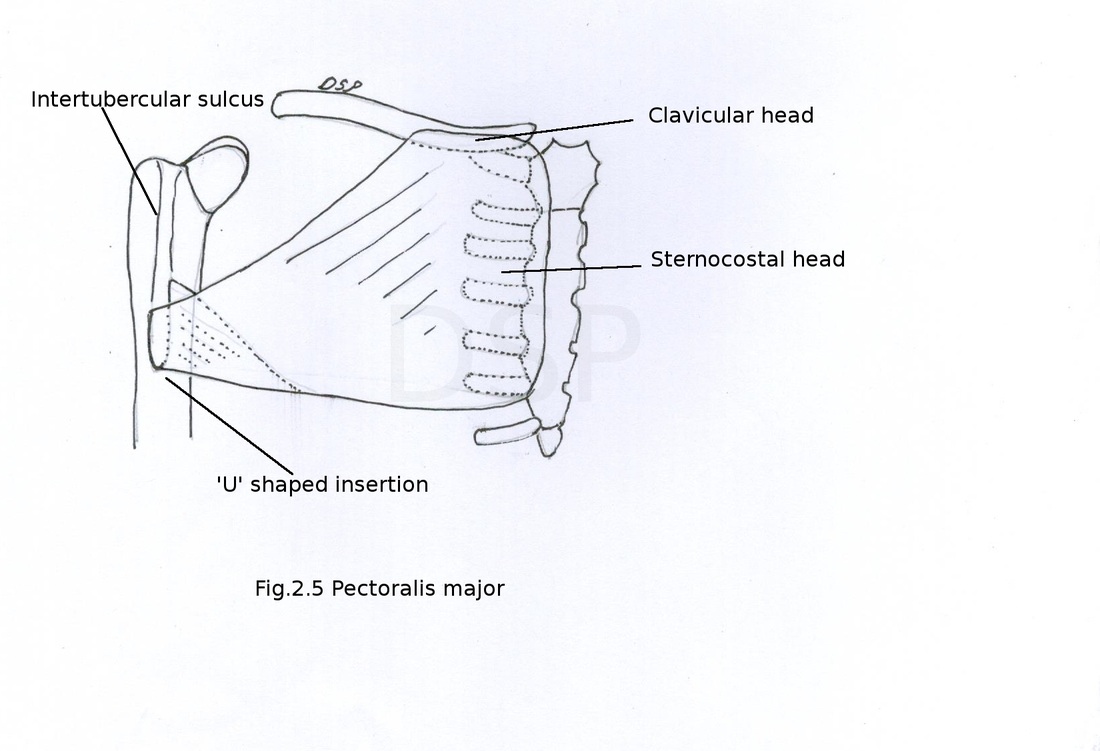 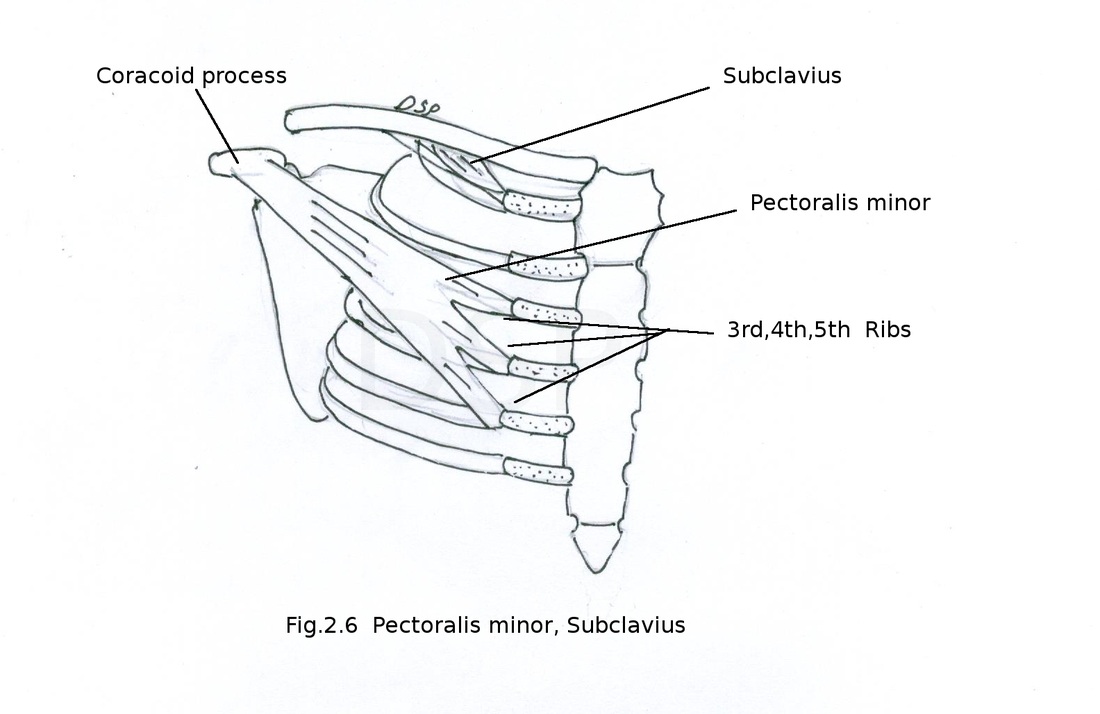 Origin: from joining part of 1st rib and its cartilage.
Insertion: goes up and insert on inferior surface of middle 1/3 rd part of clavicle.
Nerve supply: nerve to subclavius branch of upper trunk of brachial plexus
Action: it provide stability to clavicle during movements of upper limb. 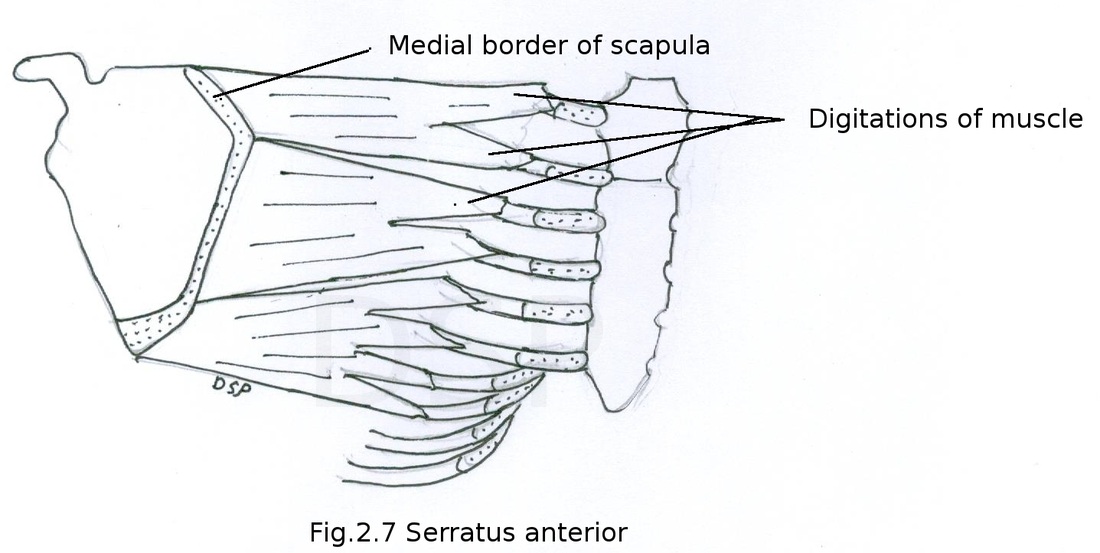