human anatomy
myhumananatomy
​LUNGS
There are two lungs right and left. These help in respiration. Right and left lung invaginated by pleura separately. These are elastic in nature and spongy in texture. In adult these are grayish in color because of deposition of carbon particles in it. Weight of right lung is 625 gm and left lung slightly less about 575 gm.
Parts of lung :
Each lung is conical in shape. Shows following parts 1) Apex 2) Base 3) Two surfaces costal and medial 4) Three borders Anterior, Posterior and Inferior 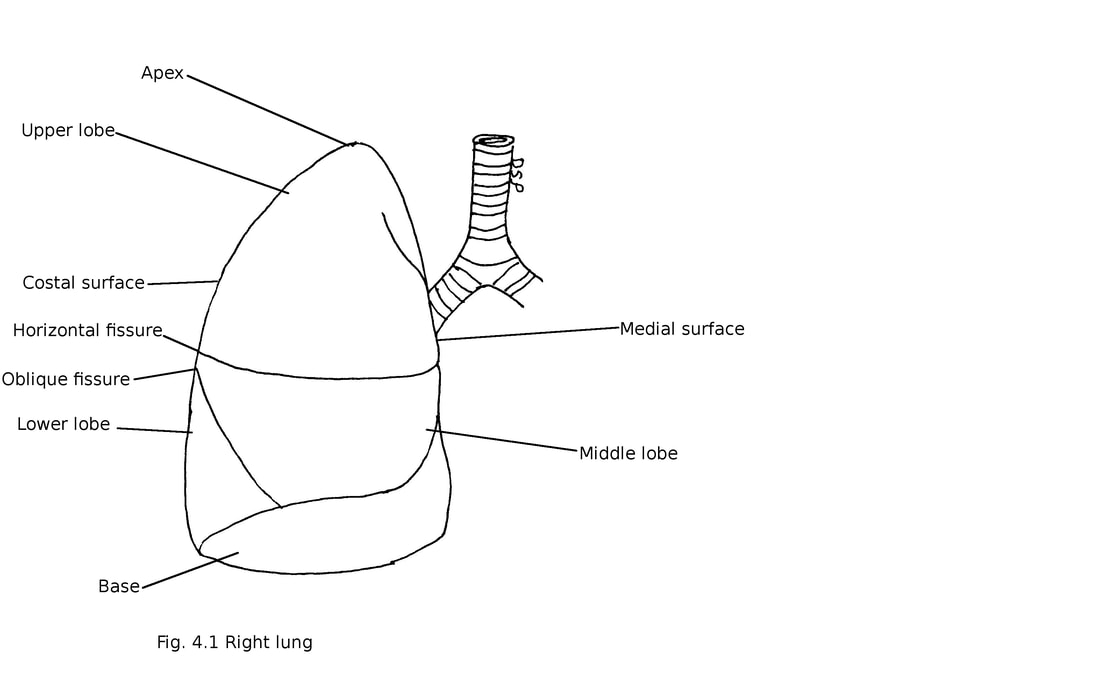 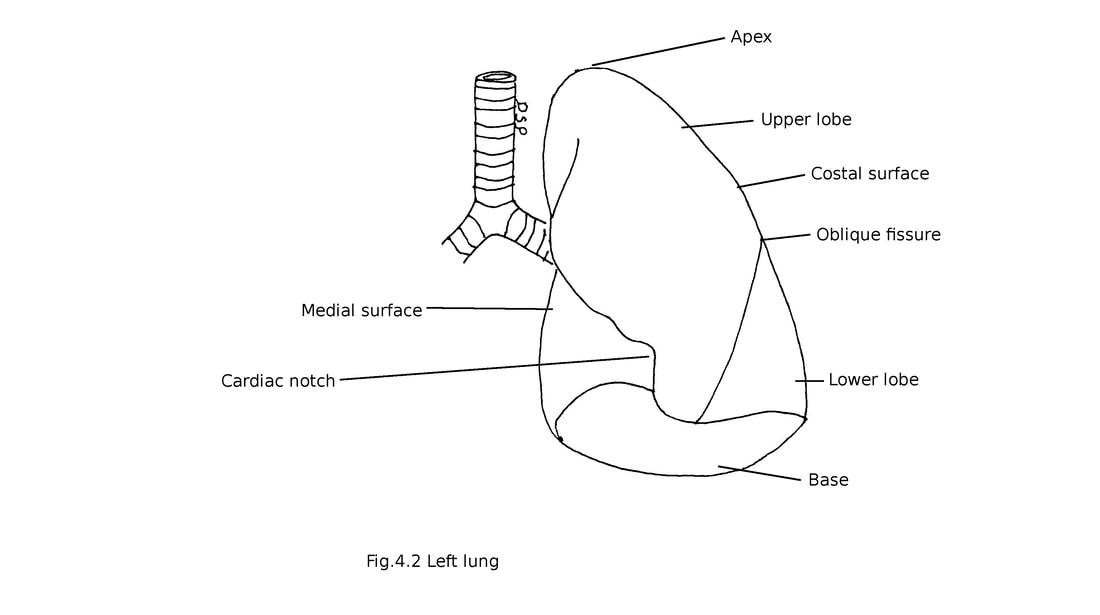 1) Apex : It is rounded upper part of lung. It lies about 3-4 cm above first costal cartilage. Apex lies in the root of neck. It is covered by cervical pleura supported by suprapleural membrane from outside. Subclavian artery goes upwards and laterally forming a groove.
2) Base : It is a concave shaped lower part of lung. Concavity is more on right side because liver present on right side. It is present over upper surface of diaphragm. Diaphragm separates base of right lung from right lobe of liver and base of left lung from left lobe of liver, fundus of stomach and spleen.
3) a) Costal surface : It is an outer surface of lung. It is convex and in contact with thoracic wall. It is covered by costal pleura. It shows transverse impressions for ribs.
b) Medial surface : It shows posterior vertebral and anterior mediastinal part. Vertebral part comes in relation with sides of upper ten thoracic vertebra also inter-vertebral discs, posterior intercostal vessels and splanchnic nerves. Mediastinal part shows a deep concave impression for heart known as cardiac impression in left lung. Hilum is present on this part. Hilum is triangular in shape through which structures of lung root enter or exit. Following are structures present in right hilum of lung from above downwards upper lobe bronchus, pulmonary artery, middle and lower lobar bronchus and pulmonary vein. In right lung from before backwards upper pulmonary vein, pulmonary artery and bronchus. In left lung structures from above downwards pulmonary artery, left principal bronchus and lower pulmonary vein. In left lung from before backwards upper pulmonary vein, pulmonary artery and bronchus. 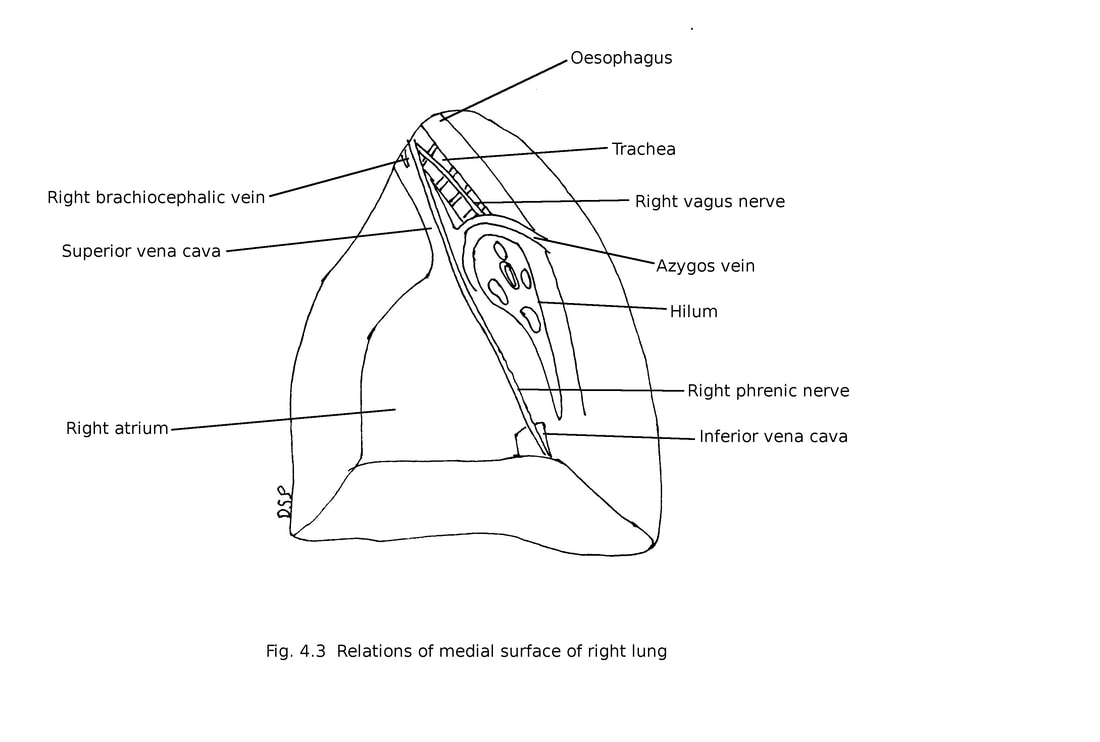 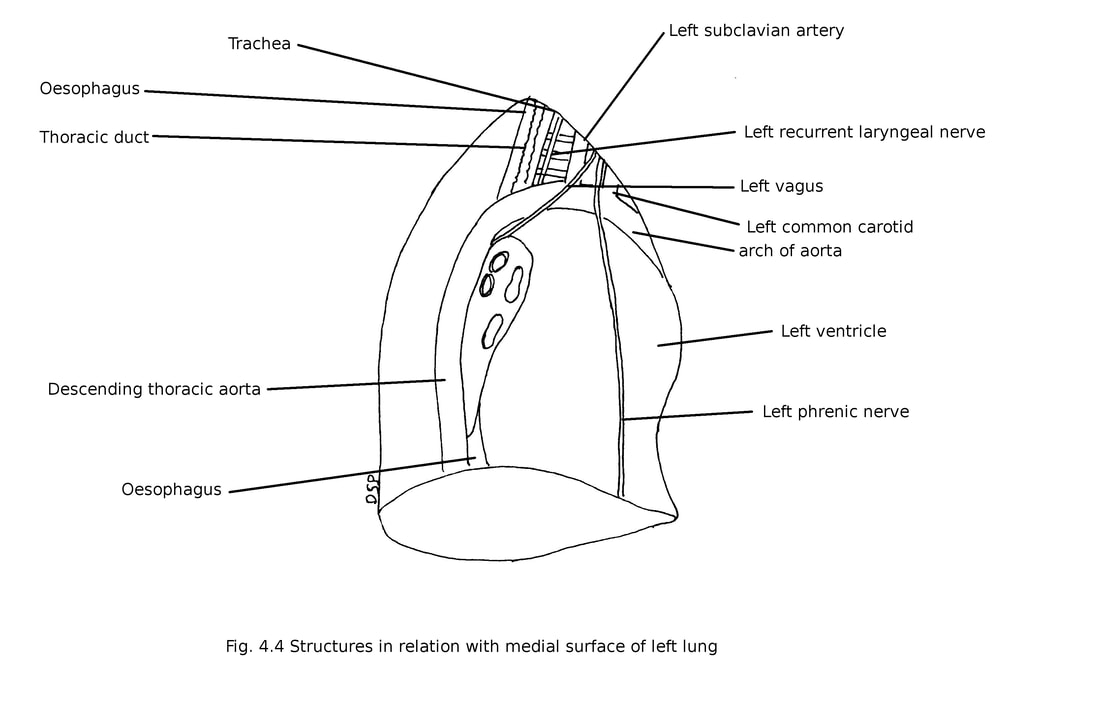 4) Borders :
Anterior : Anterior border is thin. It is vertical on right side. But on left side it follows the line of reflection of pleura and show a cardiac notch. So it is a straight up to fourth costal cartilage then deviate laterally for 2.5 cm.
Posterior : It is thick and not so will defined. It separates costal surface from mediastinal surface. It comes in relation with heads of upper ten ribs.
Inferior : It is thin and sharp border. It separates base of lung from costal surface and medial surface. It follows a line which passes through 6th rib in midclavicular line, 8th rib in mid axillary line and a point 2 centimetre lateral to 10th thoracic spine.

Lobes and fissures of lungs
Right lung shows three lobes upper, middle and lower separated by two fissures oblique and horizontal. Left lung shows two lobes separated by one oblique fissure. Oblique fissure starts at the level of 4th thoracic vertebrae (below apex) in relation with posterior border. It separates lower lobe from upper and middle lobes. It runs downwards along with 5th intercostal space follow 6th rib to 6th costochondral junction on costal surface upto interior border 7.5 centimetre behind its anterior end. Horizontal fissure separates superior and middle lobes. It lies at the level of 4th costal cartilage starts from anterior border and meets with oblique fissure at mid axillary line. It is present only in right lung
Root of lung
It connects medial surface of lung to trachea and heart. It mainly contains principal bronchus, pulmonary artery, two pulmonary veins , bronchial vessels, pulmonary plexus, lymphatics, nerves and connective tissues. It lies in relation with bodies of 5th, 6th and 7th thoracic vertebra.
Structures present in root are already described in hilum of lung.
Structure of lungs
Each lung shows from outside inwards serous coat, sub-serous areolar tissue and pulmonary substance. Serious coat is formed by pulmonary pleura . Sub-serous tissues are formed by fibroelastic tissue. It gives fibroelastic septum inside lung substance forming small lung lobules.
Trachea divides into two principal bronchus at the level of fourth thoracic vertebra. Right principal bronchus is more wide and vertical. While left principal bronchus more oblique. Principal bronchus after passing through hilum divides into secondary bronchi or lobar bronchi 3 on right side and 2 on left side. Lobar bronchus divides into tertiary or segmental bronchi. There is one for each bronchopulmonary segment. Segmental bronchi then divided into smaller unit known as terminal bronchioles. The terminal bronchioles again divides and form respiratory bronchioles. 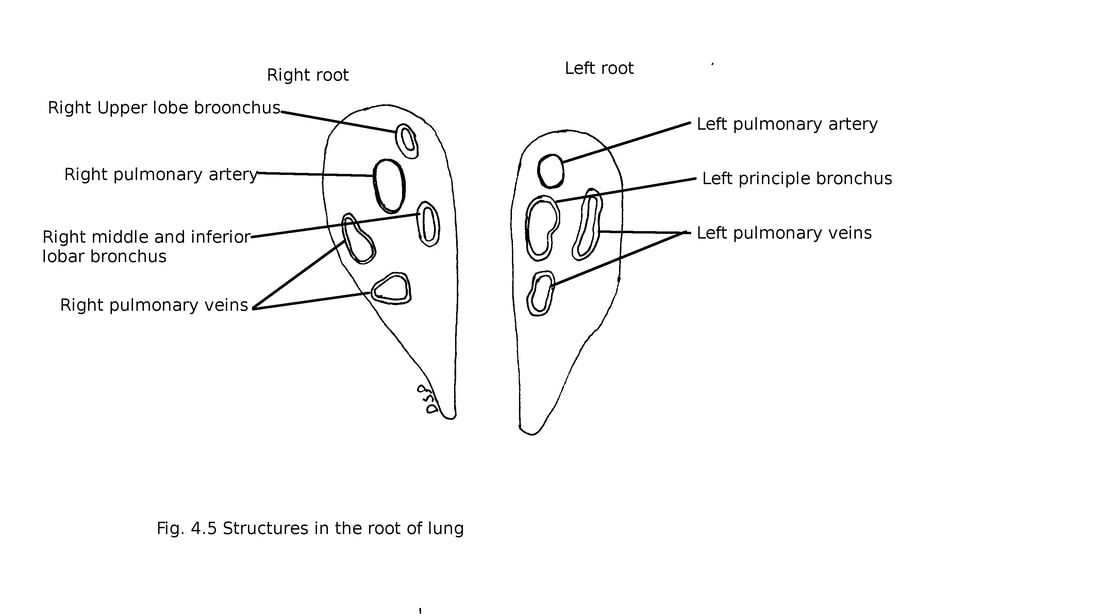 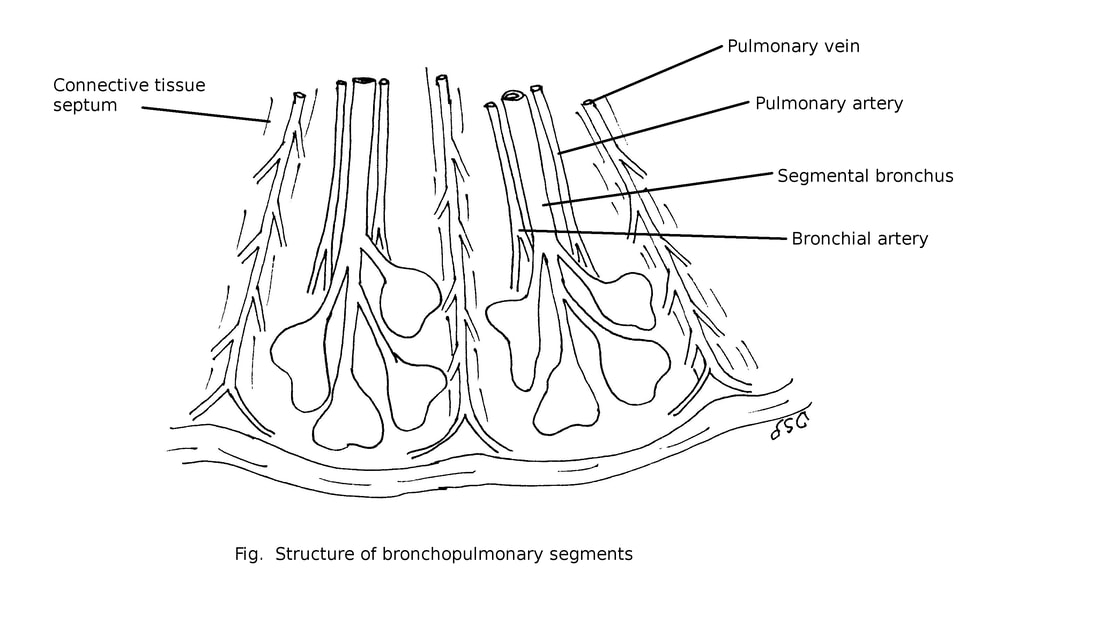 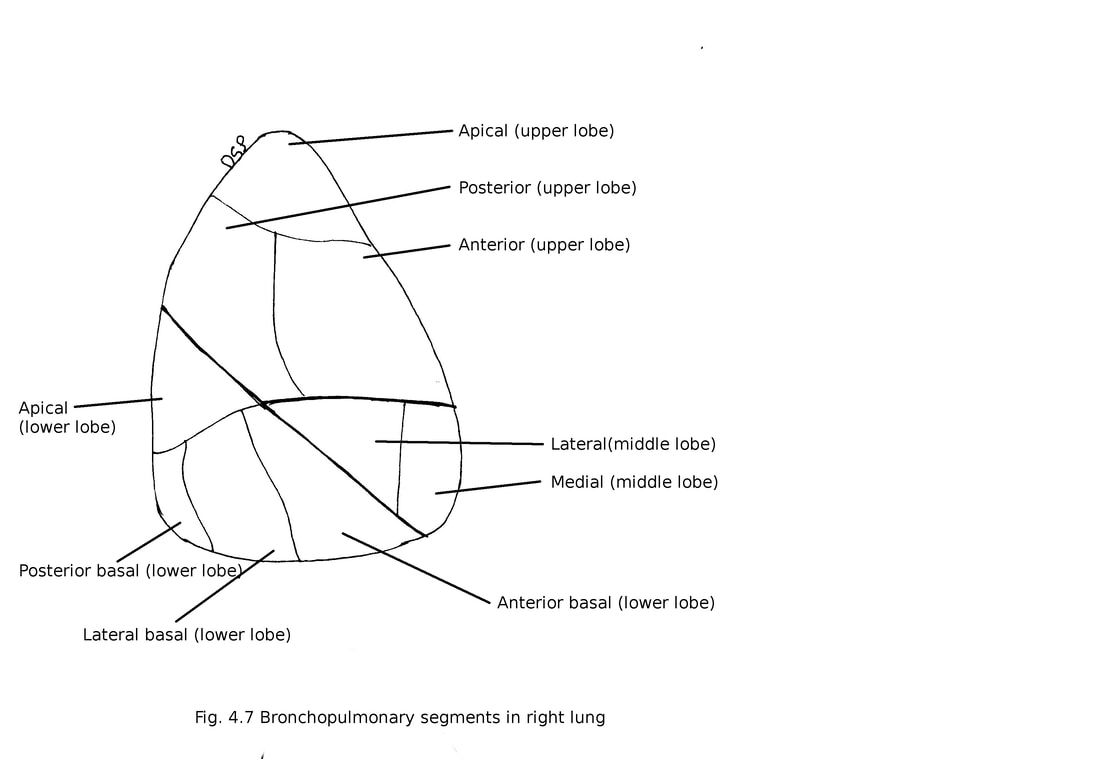 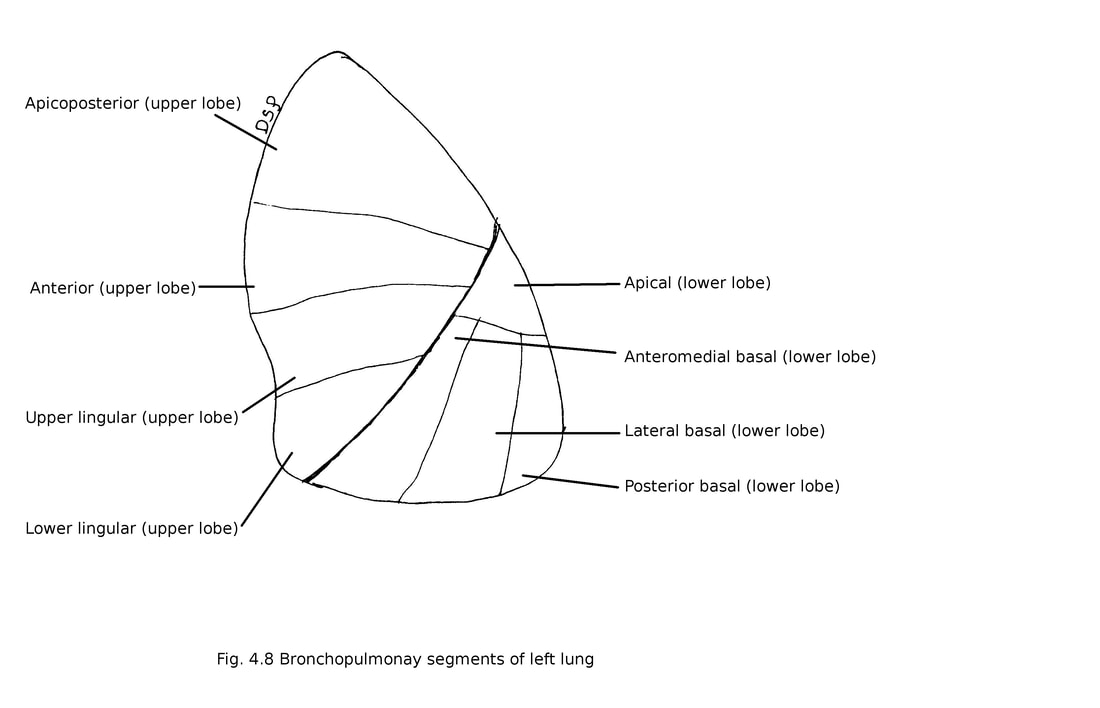 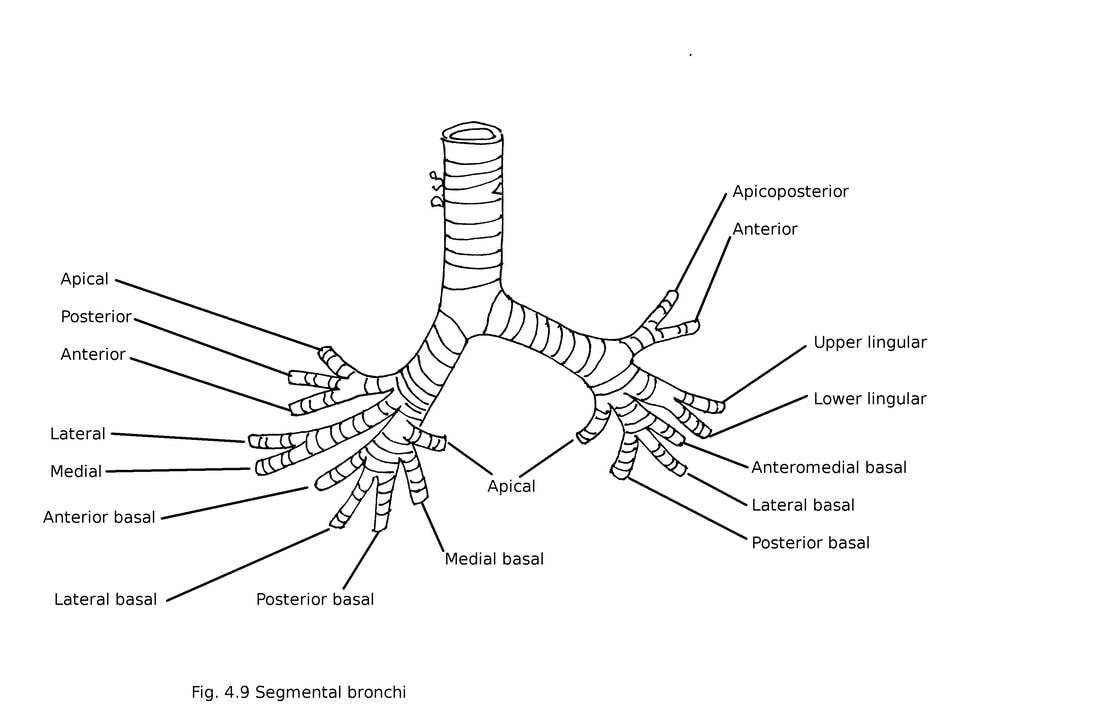