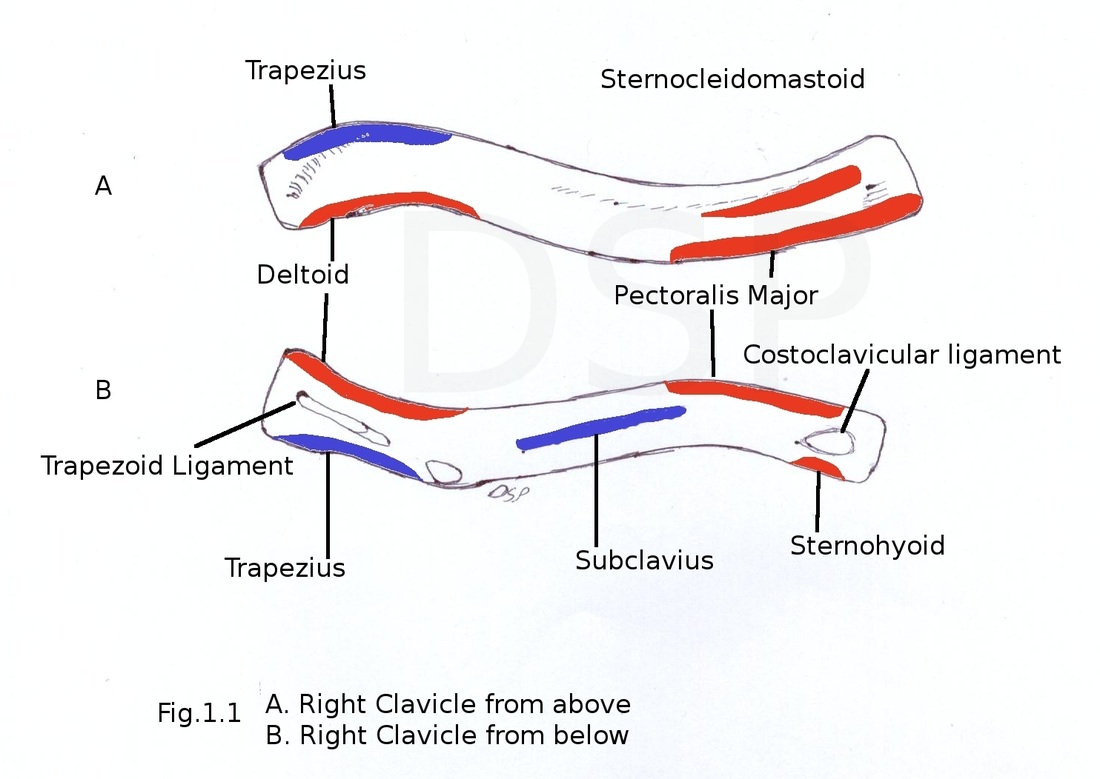 It is a long bone which lies horizontally. It articulates medially with sternum and 1st costal cartilage and laterally with acromion process of scapula.

It is flattened above downward. It shows an articular facet which articulates with acromian process of scapula.

Deltoid origin is on anterior border of lateral 1/3.Pectoralis major has origin on medial 2/3 of shaft. Clavicular head of sternocleidomastoid has origin on superior surface roughned medial 2/3.

Trapezius insert on posterior border of lateral end. Subclavius is inserted into the subclavian groove on inferior surface.

commonest site of fracture is junction of its lateral one third and medial two third. It is the weakest point of clavicle. 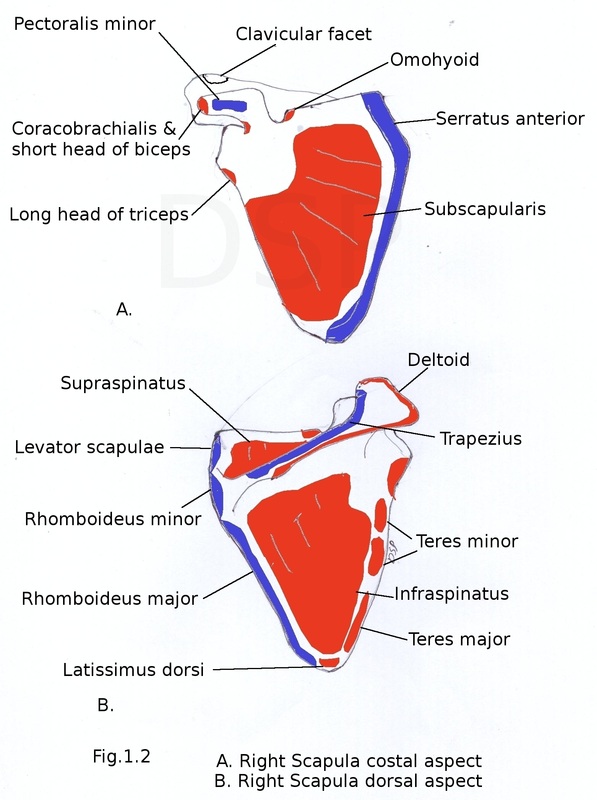 Costal surface
Dorsal surface
Costal surface is concave directed medially and forward. It comes in relation with intercostal spaces and ribs. Three longitudinal ridges are present on this surface.
Dorsal surface is convex and divided into parts by spine of scapula a small supraspinous fossa and a large infraspinous fossa. Spinoglenoid notch present at lateral part of root of spine connecting two surfaces. Spinoglenoid notch lies near lateral angle. Suprascapular vessels and nerves pass from supraspinous to infraspinous fossa.

Winging of scapula in which medial border of scapula is more prominent due to paralysis of serratus anterior muscle. 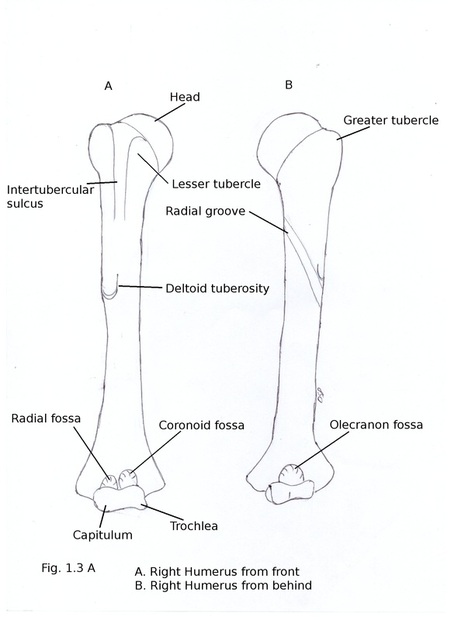 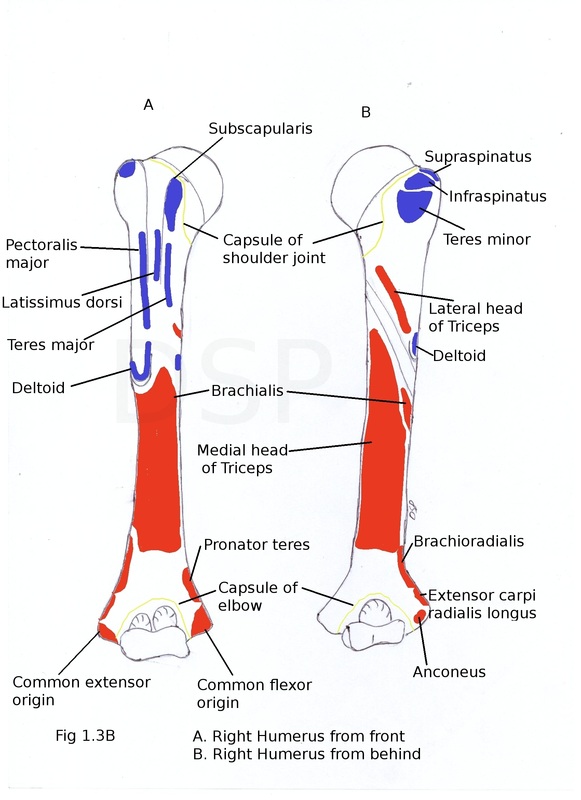 Upper end shows Head, Neck, Greater tubercle, Lesser tubercle, Inter tubercular sulcus.
Head is rounded, smooth directed medially backwards and upwards. It articulates with glenoid cavity of scapula. Neck is constriction just around head separating it from upper end. It is anatomical neck. Surgical neck is a constricted line below tubercles of upper end separating upper end from shaft. Greater tubercle is elevation on lateral part of upper end. It shows three impressions on its posterior part. Lesser tubercle is an elevation on anterior part of upper end. Inter-tubercular sulcus or bicipital groove is a vertical groove between greater and lesser tubercles. It has medial lip, lateral lip and floor.
Lower end is expanded from side to side. Capitulum is articular round projection present laterally which articulates with head of radius. Trochlea is a pulley shaped projection medially. It articulates with trochlear notch of ulna. Medial edge of trochlea extends downwards by 6mm which is responsible for carrying angle. Medial epicondyle is a projection (more prominent than lateral epicondyle ) present on medial aspect. Lateral epicondyle is a projection on lateral aspect. Medial and lateral supracondylar ridge are sharp margin present on medial and lateral side of lower end. Coronoid fossa is a depressed part on anterior aspect above trochlea. Coronoid process of ulna comes in contact with it during flexion of elbow joint. Radial fossa is similar depression on anterior aspect above capitulum. It comes in contact with head of radius during flexion of elbow joint. Olecranon fossa is a depression on posterior aspect above trochlea. It comes in contact with olecranon process of ulna during extension of elbow joint.
Shaft has three borders and three surfaces.
Borders: Anterior, Medial, Lateral
Surfaces : Anterolateral, Anteromedial, Posterior
Anterior border in upper part forms lateral lip of intertubercular sulcus. In lower part anterior border is not so sharp and becomes smooth and rounded. Lateral border in lower part forms lateral supracondylar ridge.Radial groove is present in the middle of lateral border. Medial border in upper part forms medial lip of inter-tubercular sulcus. In lower part it is continuous with medial supracondylar ridge.

Capsule of shoulder joint attached on anatomical neck of humerus but its lower margin extends downwards slightly on shaft. An opening is present in capsule for exit of tendon of biceps. Capsule of elbow joint attached on a line which passes above radial and coronoid fossa anteriorly and above olecranon fossa posteriorly.

Humerus ossify from 1 primary centre and 7 secondary centres. 1 primary centre for shaft (diaphysis) appear during 8th week of intrauterine life. 3 secondary centres for upper end 1-head, 2- greater tubercle, 3- lesser tubercle which appears during 1st, 2nd and 5th year. Fuses with each other after 5th year and with shaft after 18-19 th year. Lower end ossify from 4 centres 4- capitulum and lateral flange of trochlea, 5- medial flange of trachea, 6- lateral epicondyle, 7- medial epicondyle appears during 1st, 9th, 12th and 4th year respectively. Out of these first three fuse with each other during 13-14th year and with shaft during 15-16th year. Medial epicondyle appear as a separate epiphysis and fuses last during 18-20th year.

- Surgical neck is the common site of fracture. Nerves which are liable for injury are Axillary nerve – near surgical neck, Radial nerve  spiral groove, Ulnar nerve – behind medial epicondyle.
-Non union of fractures of humerus is common when fracture is located at the junction of upper one third and middle one third.
- Dislocation of head of humerus is common inferiorly because capsule of shoulder joint extends more below on shaft. 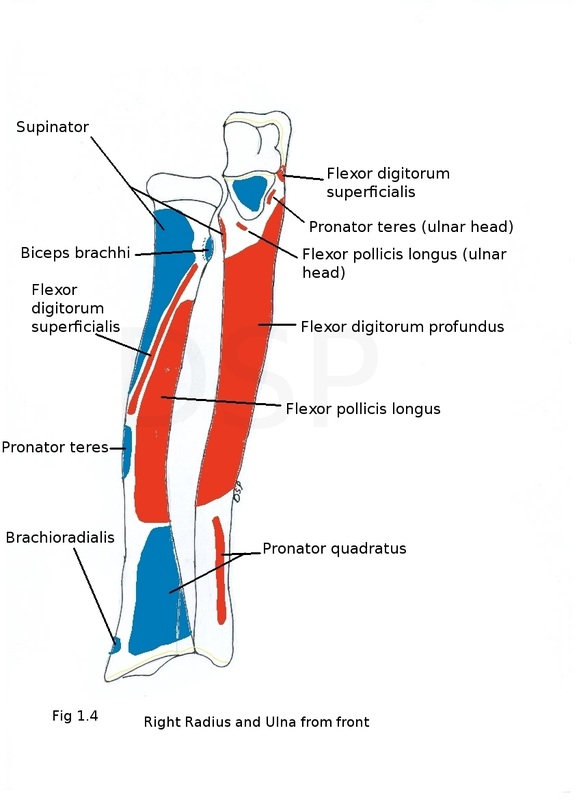 Common site of fracture is at 2cm above lower end. Colle's fracture is a fracture 2cm above lower end. Distal fragment displaces backward, upward and laterally. Dinner fork derormity of forearm is visible in this.
Non union and cross union of radius and ulna is common when both bones fractured at same time.
Smith's fracture same as Colle's fracture but distal fragment displaced forward.
Subluxation of head of radius (pulled elbow) sudden traction on head of child may cause head of radius to slip from grip of annular ligament. 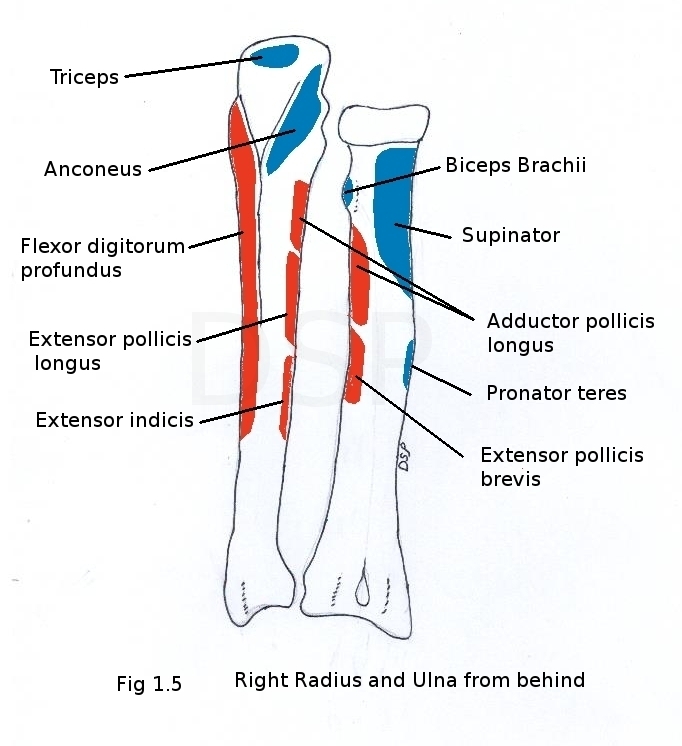 Parts:
Upper end,
Lower end
Shaft
Upper end shows Olecranon and Coronoid process, Trochlear and Radial notches. Olecranon process is a beak like process which projects upwards. Comes in contact with olecranon fossa of humerus during extension at elbow joint. It shows upper, medial, lateral, anterior and posterior surfaces. Posterior surface shows a triangular area which continue as a posterior border of shaft. Anterior surface forms upper part of trochlear notch. Medial surface continue as medial surface of shaft and coronoid process. Lateral surface continue as posterior surface of shaft. Coronoid process is a process which lie juust below olecranon process projecting forward. It shows medial, lateral, upeer and anterior surfaces. Upper surface is a lower part of trochlear notch. Anterior surface is rough and triangular shows a ulnar tuberosity in lower part. Lateral surface shows a radial notch for articulation with radial head. A supinator crest is present on this surface.
Shaft shows three borders anterior, posterior, interosseous and three surfaces anterior, posterior, medial. Anterior border starts from lower part of ulnar tuberosity to anterior part of styoid process. Posterior border is curved and subcutaneous starts from apex of a triangular subcutaneous area on back of olecranon process to posterior margin of styloid process.Interosseous border is sharp in middle part. It is continuous with supinator crest above. Anterior surface is between interosseous and anterior border. Posterior surface is between posterior and interosseous boreders. An oblique ridge divides this into upper small and lower large areas. Lower area is divided into medial and lateral part by a vertical line.
Lower end shows head of ulna and a styloid process. Head articulates with ulnar notch of radius forming inferior radioulnar joint. A articular disc is present between wrist joint and head of ulna. A styloid process is present on osteromedial side of ulna.

Colles fracture: bone fracture about two centimetre above its lower and distal fragment is displaced upwards, backward and laterally.
Pulled elbow in this due to sudden traction on hand of child below 6 years causes dislocation of head of radius from annular ligament.
Dislocation of elbow in this 3 point relations are lost, 1 point on tip of olecranon, second and third point on medial and lateral epicondyle of humerus it forms the equilateral triangle these relations are disturbed in dislocation of elbow. 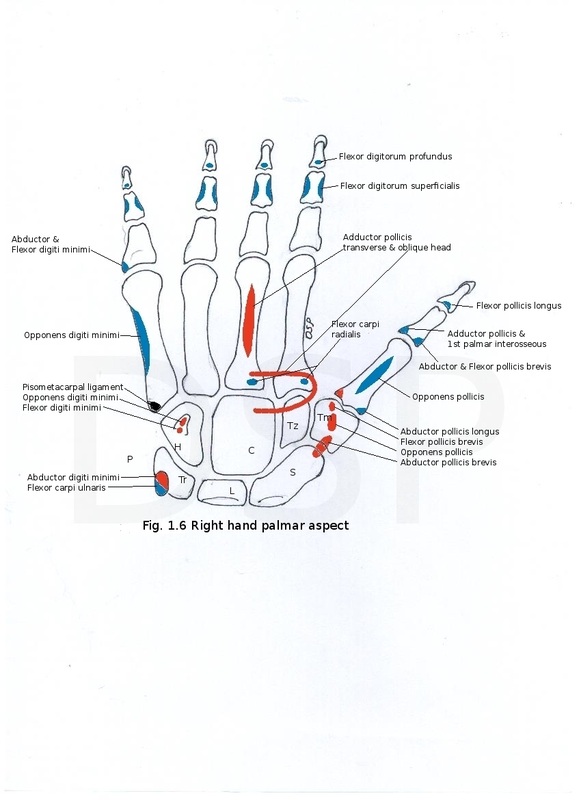 There are 8 carpal bones in hand
proximal row : 1 scaphoid 2 lunate 3 triquetral 4 pisiform
distal row : 1 trapezium 2 trapezoid 3 capitate 4 hamate. Scaphoid is boat shaped and having tubercle laterally. Lunate is semilunar in shape . Triquetral is having a oval facet on palmar surface and its shape is wage like. Pisiform is pea shaped.Trapezium is quadrilatral in shape having a vertical groove on palmar sueface with a crest on lateral side. Trapezoid looks like a boat. Capitate is largest carpal bone with head directing a palmar surface. Hamate it is of wedge shaped bone head and hook of hamate projects anteriorly on palmar surface . Carpal bones are having 6 surfaces out of these palmar and dorsal surfaces are non articular except traquetral and pisiform. Palmer surface of triquetral articulate dorsal surface of pisiform. Dorsal surface of carpal bones are large.

Carpal bones appear in a circular fashion capitate and hamate in 1st year, triquetral, lunate and scaphoid in 3rd, 4th and 5th year respectively after that trapezium, trapezoid , and pisiform in 6th, 7th and 12th year respectively.

Scaphoid fracture: fracture of scaphoid is common. This causes avascular necrosis of scaphoid.
Anterior dislocation of lunate is common.

These are 5 miniature long bones of hand numbered from lateral to medial side. Parts head, shaft, base. Head forms knuckles of the hand. Head is articular articulating with base of proximal phalanx. Articular surface extends more on palmar part.
Shaft shows a triagular area on its dorsal surface apex towards the base. Palmar surface is concave proximo distally.
Base of metacarpal is irregular articulating with distal row of carpal bones.
Other characters of metacarpal bones.1. It is a shortest and stoutest metacarpal bone. Its base is concavo-convex for articulation with trapezium. Its head shows medial and lateral tubercle. Lateral tubercle is more prominent. Sesamoid bone lies here.
2. It is a longest metacarpal bone. Its base shows of groove. Medial lip of the groove is prominent. Medial side of the base shows an articular strip.
3. It shows a styloid process on dorsal surface on it lateral part. Lateral side of the base shows an articular strip.
4. A single quadrilateral facet present on proximal part of its base. Two small facets present on lateral side and a strip like facet on medial side.
5. It shows a nonarticular prominent tubercle on medial side and a strip like articular facet on lateral side.

Origin of muscles, Insertion of Muscles, Other Attachments:

1 primary centre for shaft. secondary centres for the head of 2nd to 5th metacarpal and base of first metacarpal. Secondary centre appear during second year and fuses with shaft after 15th to 18th year.

Number in each hand are 14, 3 for medial 4 fingers and 2 for thumb.Phalanges are proximal, middle and distal. Each phalanx shows base, shaft and head.
Base of proximal phalanx is concave for articulation with head of metacarpal bone. Bases of middle and distal phalanges shows two concave facets. Shaft phalanx is convex transversely on its dorsal surface. Palmar surface of phalanx is flat side to side and slightly concave below upwards. Heads of proximal and middle phalanges are pulley like for articulation with other phalanges. The head of distal phalanx shows a horse shoe shaped tuberosity on its palmar aspect.

Ossification :
Primary centre for phalanges appear in 10th week and 11 week and 8th week of intrauterine life for proximal phalanx, middle phalanx and distal phalanx respectively. Secondary centre for base of phalanx appear in second to third year. All the centre fuse with each other during 16 to 18 years of life.